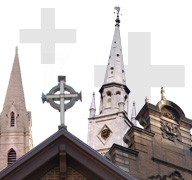 History of the Collegiate Churches of NY
About Us

The Birth of a Church in the New World

The first Christian religious services in the small colony of New Netherland on Manhattan Island were most likely conducted by Comforters of the Sick (Krankenbezoekers), who were empowered to baptize and marry the inhabitants of the fledgeling province, but were not authorized to administer Holy Communion. In 1628, the Dutch West India Company sent over the first ordained minister, beginning the Reformed Dutch Church in America. Under the direction of Peter Stuyvesant in the mid 1600s, the Church flourished, but also struggled with questions of religious freedom in this new world.

Thankfully, the Dutch were allowed their religious freedom when the colony was taken over by the English, who even helped pay the ministers’ salaries through taxes in the absence of financing from the Dutch West India Company. In 1696, the Reformed Dutch Church was granted the first charter of any religious body by the English. It was now known as the Collegiate Church, and was able to elect officers, have an income, buy and sell property, and more.

Throughout most of the 1700s, conflicts among different groups in the Dutch church were compounded by the question of whether Holland still retained control of colonial ministers. Finally, a plan by John Livingston united all the Dutch Churches in America under one body, with local control and minimal oversight by Holland.

As the Collegiate Church struggled with independence, so did the English colonies. The Church mostly supported the American Revolutionary movement, and two of its prominent ministers were outspoken champions of the colonists’ cause.

With many churches comandeered by the British for their use during the war, pastors were forced to flee, leaving their congregations without services. After the war ended, many of the Church's congregations—not to mention property—were in need of rebuilding. It was during this period of regrouping that the Church's organizational structure saw some of its most lasting changes.

In 1792, the project of a committee appointed to translate and publish Church law grew into its first constitution. This constitution laid out doctrines, as well as a governing structure completely independent of Holland, that remain largely unchanged to this day.

With a stable structure in place, the Church entered an era of continued growth. New congregations were organized and new church edifices built. As the city spread out in the 1800s, other Reformed Dutch Churches independent of the Collegiate Churches were organized. This growth was curtailed only by a time of intense flux following the Civil War, when increased immigration to New York dramatically changed the landscape of the Church.

Throughout times of prosperity and hardship alike, the Collegiate Church has served its congregations well, maintaining roots in history while leading the way to the future. Today, the Church -- founded in 1628 with “fully fifty communicants” -- has spread its influence not only to Greater New York, but across the country and around the world. Recently history was made when the Collegiate Church worked with its denomination to open the pathway to ordination as a minister to LGBT persons. Five city-wide ministries are unified under a single historic church, by core values of inclusion, self-exploration and positive thinking.

We encourage you to search, discover and flourish—as we have done since our very first services on Manhattan Island.

Learn more about the four Collegiate Churches of New York